Lewis Greenfield, 19, a member of Athena Martial Arts based in the YMCA Sovereign Centre in Slipshatch Road, Woodhatch, has made history at the club by claiming its first British Title. Former Reigate Grammar pupil Lewis, of Salfords, fought for the BKBU (British Kickboxing Union) -80kg title over three two minute rounds against an older, heavier and more experienced opponent who had held the title consistently for five years. The bout took place at the Guildford Spectrum on October 26 and after three hard fought rounds all three judges had Lewis winning every round. 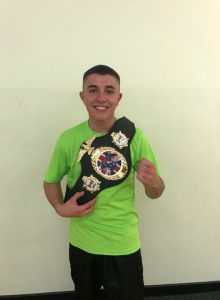 After the fight, an emotional Lewis said: “I’m just so thankful for all the help and support people have given me. I’m so thrilled to win Athena’s first British Title.” Coach Lisa Boardman, who runs Athena Martial Arts and who was coaching Lewis at ringside during the contest, said: “Lewis’s hard work and dedication has paid off and he thoroughly deserved the win. I’m sure it will be the first title of many more to come for Lewis.” Athena Martial Arts runs kickboxing classes for juniors and adults from the Sovereign Centre on Tuesdays, Wednesdays and Fridays.

You can find out more about which cookies we are using or switch them off in settings.

This website uses cookies so that we can provide you with the best user experience possible. Cookie information is stored in your browser and performs functions such as recognising you when you return to our website and helping our team to understand which sections of the website you find most interesting and useful.

Strictly Necessary Cookie should be enabled at all times so that we can save your preferences for cookie settings.

If you disable this cookie, we will not be able to save your preferences. This means that every time you visit this website you will need to enable or disable cookies again.

This website uses Google Analytics to collect anonymous information such as the number of visitors to the site, and the most popular pages.